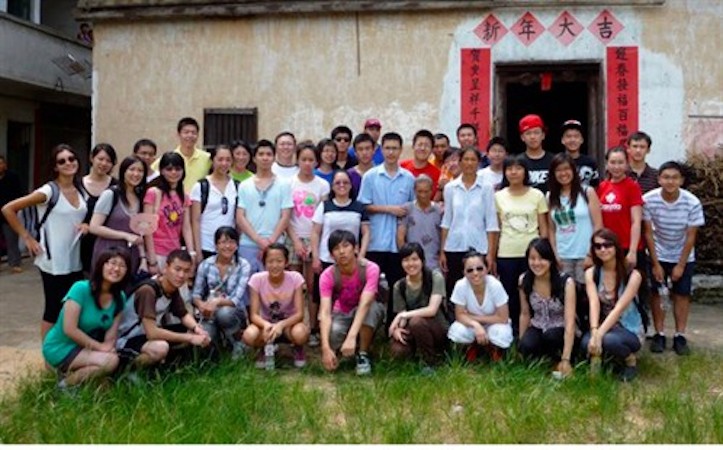 Back in 2001, I had the chance to teach English to high school students in Sichuan for one month. During that trip, I was the only oversea Chinese in the group of English teachers that went together and I ended up having to translate for the team throughout the trip. On that trip I realized that knowing the Chinese language is really helpful and because of that I was able to grow really close with my students, acting like a big sister towards them. It was also during this trip that they announced that Beijing would get to host the 2008 Summer Olympics. Before my departure, my lovely students gave me a shirt that had the Beijing Olympic logo on it, and then a dream was planted in my heart. I prayed that in 7 years I could come back to China in 2008, but this time as a team leader rather than a participant.

However the 7 years between 2001 and 2008 were very eventful for me.  I finished university; worked for 2 years; went to graduate school to obtain a Masters Degree of Cross-Cultural ministries; then I met the love of my life and got married in 2006. When I was still finishing up my master’s degree, I began to work a temporary job at CRRS in 2007. The idea of bringing a team of young Canadians to teach English in China came up and I wrote a proposal naming it “Project Shine”. The timing was impeccable when I realize this team will be going in the summer of 2008 to China! So this was the rebirth of the dream I had in 2001.

The first Project Shine in 2008 was a partnership effort with CCM as the youth director Allen Chan co-led the team together with me. Project Shine 2008 and 2009 were unforgettable as we went to the mountainous, isolated areas of Rongshui in Guangxi Province. For Project Shine 2010, we went to a new location called “GongCheng County恭城” which is also located in the Guangxi Autonomous Region. This year our English teaching team consisted of 35 people, with 28 from Vancouver and 7 from Toronto, their age ranging from 14 years old up to a couple in their 50s. We separated the students in to 14 classes and taught over 200 local Chinese students.

In the opening ceremony, held in the boiling 35 degree heat and high humidity, we were greeted with the sweet sound of the local mountain song performed by selected students. Our smiles met their curious faces as I introduced each one of our English teachers to them.

“GongCheng County” is known for its’ academic achievement because there is a legend that Confucius’ descendents lived here before. This might be true as we find that the local students here have a very good attitude about learning and they strive to do their best in academia. In two short weeks, our English teachers were able to help them by correcting their pronunciation, marking their essays and practicing conversations during “English corners”. Not only did we teach them English, we also taught them about life, encouraged them to keep going even when things are tough in life, and we developed a deep friendship with the local students.

This year we had many precious memories with the students. During the cross-cultural day every class performed a Christmas song with such energy and creativity. In return, the students also volunteered to perform acts such as singing, dancing, choreographing, reciting poetry and they even put together an English play for us all on their own!

Some other highlights we experienced on this trip were the Easter egg hunt and birthday party. Also, GongCheng is known for the “Yao tribe瑶族” ethnic group. Our team got to witness their beautiful traditional dancing and joined in the bamboo stick dance with the locals, though many of us failed to dance gracefully as the performers did!

During the home visit portion of our trip we visited several families in the villages and had the honor of tasting the local lunch with their famous “oil tea (油茶)”. Truly the taste of oil tea made from a family in the village is better than the one served in a restaurant in the city. We also had the chance to walk around an agricultural field, an experience that many of us had probably never had before. Most local students had grown up on and around farms and they know exactly what kind of plants or vegetation that is in their surroundings. To a modern city girl like me, I am clueless as to what kind of trees or plants I walk by. The local students have really opened my eyes to the details and complexity of nature if we just take more time to observe our surroundings. As the old saying says “modern day people should really slow down sometimes to smell the flowers!”

Every time I go on home visits to the villages the beauty in the simple life strikes me. Giving the children a beach ball in the villages brings them so much joy, and it brings me joy when I see their laughter. The irony is that the beach ball was purchased in Canadian dollar store, yet it is made in China.

Project Shine is also a place to train up leadership skills for the team members that we bring to China. Some or indeed most of our team members have never taught a class before or had to do so much public speaking for 2 weeks consecutively. This opportunity to teach English sharpens their critical thinking skills, flexibility, creativity and confidence.

Out of the 35 team members, I chose 5 team members to be team leaders and they all did an excellent job. Their responsibilities included leading the debrief session every night during team meetings, staying up late nights making sure everyone is in their rooms, disciplining, inspiring and encouraging the team members. I am very grateful for them, as this was and is a team effort. All in all, we have grown together as a team and learned a lot about ourselves personally. Most of all, we’ve sown in sweat (because it is so hot) and tears as we departed from our wonderful students and hopefully left behind a blessing.

One team member said to us after the trip, “Thank you very much for organizing this amazing trip this year and for choosing me to go! It was an incredible and truly the most rewarding experience of my life. It has changed my outlook on life and my attitude towards studying and school. Once again, thank you so much for giving me this wonderful opportunity! I have learned a lot from the students as well as making new friends.“

Thank you for your continual support of Project Shine through prayer, encouragement and finances!

With a heart of thanksgiving to God,